The Court date has been postponed until 2023

We will keep you inform about any update, In the mean time we have to continue advocating for Francisco and our migrant community, Refugees, Kids still in cages and many migrants in prison.

Would you donate today to support Francisco Aguirre with his case?.

Yes Francisco is fighting his Asylum case and need all the support we can provide, We need to collect the funds to keep fighting until Francisco is safe from deportation to his death. Yes Francisco Can be sent to death sentence if he get deported.

Donate what you can today, We appreciate your support.

Francisco Aguirre is an influential and brilliant leader in the immigrant rights and labor movements, a refugee from El Salvador, a long-time Portland resident, a talented musician, and a devoted father. He is also experiencing the horror that far too many Central American parents know: Grieving a senselessly murdered child. Cruelly, he faces years in prison for fleeing his own potential death in El Salvador.

In 2014, Immigration and Customs Enforcement (ICE) agents came to Francisco’s home and tried to arrest him without a warrant and separate him from his family. Francisco then publicly sought sanctuary in the Augustana Lutheran Church in Portland, Oregon.

In a deeply unusual and likely political move, the Department of Justice (DOJ) charged Francisco with re-entry fifteen years after a previous deportation to El Salvador, which he had fled due to extreme violence against him and his family by the military.

Two weeks after Francisco and his family left the church, Department of Homeland Security (DHS) investigators came to their home to question and harass them about food stamps. Moises, Francisco’s eldest child, hid under the bed while the investigators questioned his dad and step-mom. Afterward, Francisco tried to reassure Moises that the DHS agents weren’t after him, but Moises was left traumatized by the situation. Moises kept begging to go back to El Salvador because he was scared of ending up in DHS custody. Finally, in July 2015, he flew back.

MOISES HAS BEEN MURDERED

On February 2, 2016, Francisco received the worst news any parent could hear: Moises had been murdered in El Salvador. Reports are that two gunmen were ordered to kill him. The investigation is ongoing but the chances of finding the perpetrators are unlikely given that people don’t want to cooperate out of fear of retaliation.

Francisco is a pillar of his community and his son Moises often volunteered to work with him. He’s been active in helping defend the rights of workers and other immigrants Portland. Yet, the DOJ’s prosecution of Francisco continues. His trial is scheduled to begin April 19th, 2016.

We are now launching the second phase of the campaign. Please sign and share the petition demanding that ICE allow Francisco to present his strong refugee claims to an immigration judge and stop terrorizing this family!

THESE ARE OUR DEMANDS 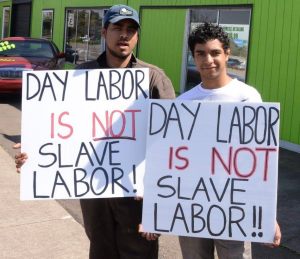 in front of car dealer that refuse to pay the workers.

IMPORTANT VICTORY WITH DOJ BUT THE FIGHT CONTINUES WITH ICE!

Great news, the U.S. Department of Justice (DOJ) has dropped the prosecution against Francisco! This means Franciso is no longer facing prison time and an unjust criminal reentry charge. Now, it’s up to us to double-down on our efforts and get ICE to end its harassment of Francisco Aguirre and his family.

With your help, more than a hundred organizations signed support letters, thousands of individuals signed petitions, and cities around the country held rallies and vigils demanding that the charges be dropped. This is an important victory in his case and we hope that it will serve as an example for the DOJ to stop prosecuting refugees escaping violence.

Francisco is appealing ICE’s attempt to deport him through a Final Administrative Removal Order to the 9th Circuit Court of Appeals.

In the meantime, he continues his activism! Today, the New York Times published a Letter to the Editor from Francisco about his story. Additionally, he was prominently featured in a recent human rights report about reentry prosecutions. Francisco is now eligible for a work permit, Thanks to the supporters around the nation he was able to collect the money to pay the application fee..

Less than one week later, ICE is up to its old tricks..

Rather than giving Francisco the opportunity to argue his case for asylum/withholding of removal before an immigration judge, ICE served him with a “Notice of Intent to Issue a Final Administrative Removal Order” (FARO), a little-known maneuver in which an ICE agent orders a non-citizen to be deported without even the limited judicial oversight provided by immigration court

I owe my freedom to the people.

Many people stop doing their things to spend time with me in sanctuary, at court, planning and protesting.

I thank you all for your support and I invite you to please continue supporting my case that is not over yet.

You have the power to make the change, many people like me are under attack by ICE-ERO. Let´ s work together to have a more inclusive communities.

United With Francisco has been always advocating for the TPS holders to stay.

Please join us in calling on the DOJ to drop the charges against him so he can grieve his son’s death. Tell the DHS to grant Temporary Protected Status to Central Americans so that no one else suffers the same situation due to immigration system’s cruelty! 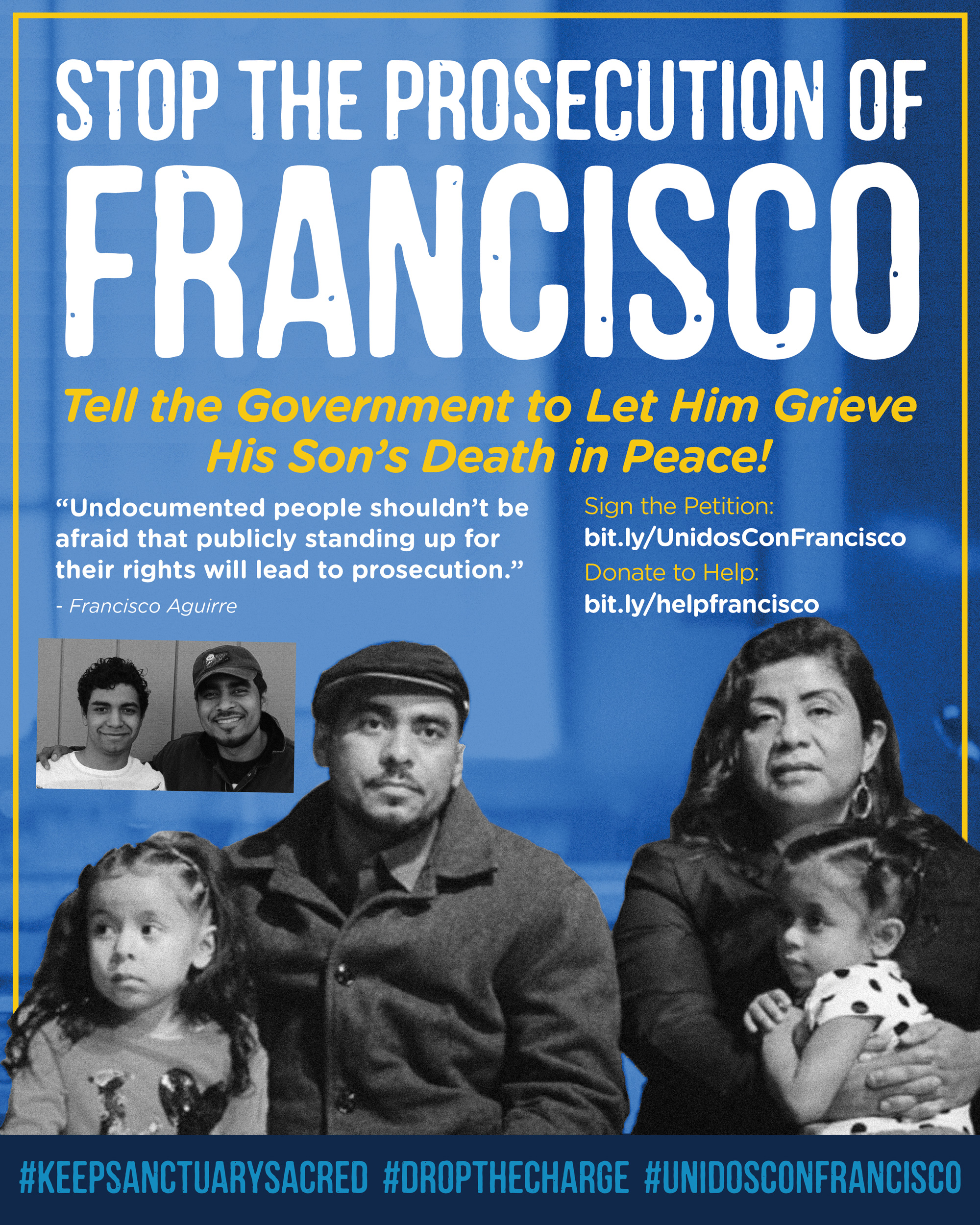 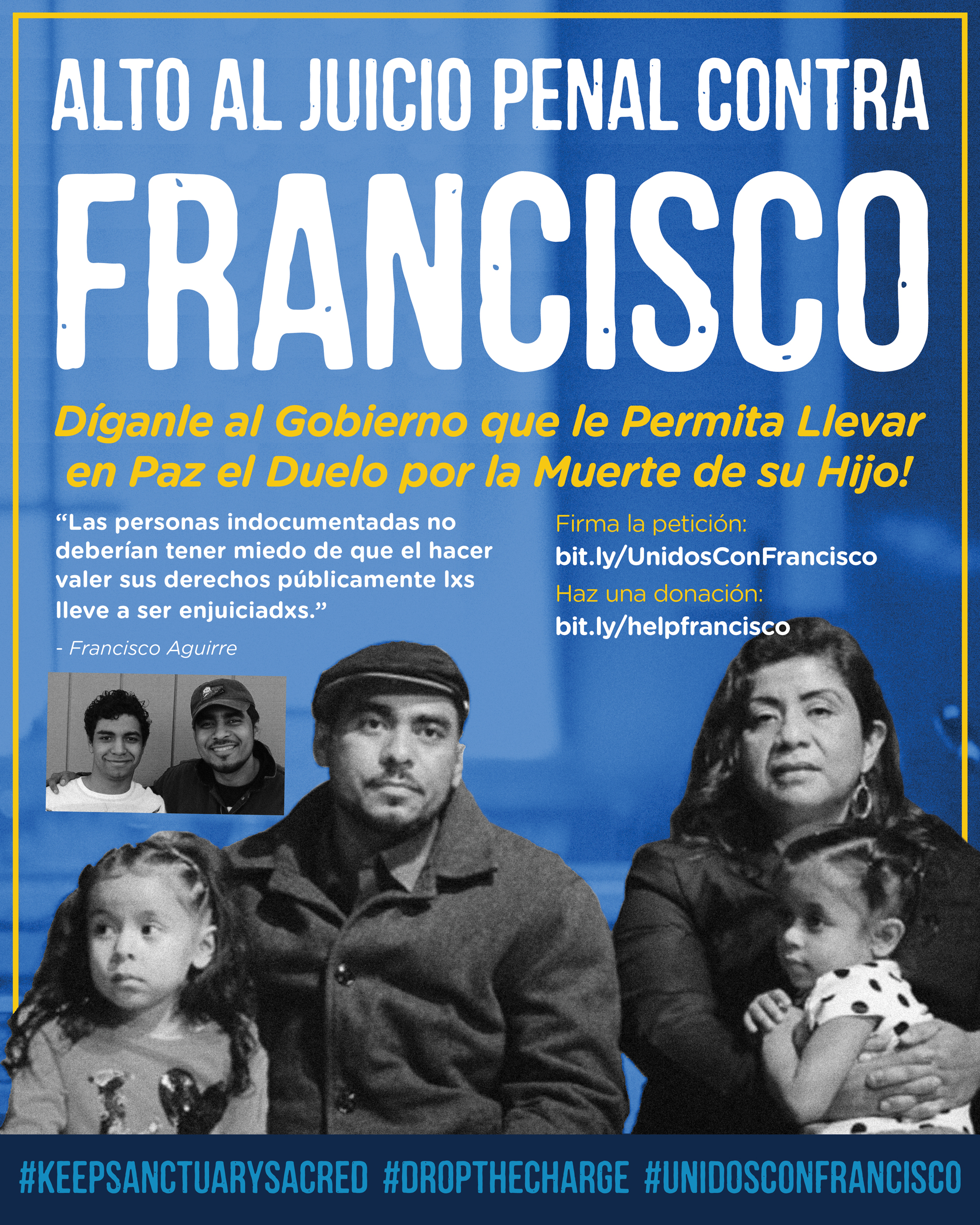 Organizations can sign on to the letter at this link: http://goo.gl/forms/Nh7R9zVz8L

We undersigned labor, faith, immigrant rights, and civil rights organizations are following up on the previous letter sent on September 8, 2015 and write to ask that you dismiss the reentry charges currently against Portland labor leader Francisco Aguirre (docket case: #3:14-cr-00400-JO-1). In addition to the concerns mentioned in the previous letter, we wanted to highlight the recent tragic murder in El Salvador of Mr. Aguirre’s 19-year-old son Denis Moises Escalante Aguirre, known as Moises by his friends and family.

Francisco was told by Salvadoran police that Moises had been playing soccer with friends when two men called his name. When he answered, they told him that they were ordered to kill him and shot him sixteen times. His legs almost fell apart from his body due to the impact of the shooting. Horrifically, Moises is just one of many close family members of Mr. Aguirre who have died from the violence in El Salvador.

Moises had been living in Oregon with his father after asking for asylum himself. He had become well-known by activists in Portland and accompanied his father in his work in the community. However, Moises had been so traumatized by his experiences in a child refugee detention center and was terrified by the targeting of his father by DHS and also the prosecution by DOJ, that he became convinced he would end up imprisoned again if he stayed in the United States. Moises begged to return to El Salvador and did so in July 2015. He was dead a little over six months later.

While Mr. Aguirre mourns his son and must explain their brother’s vicious murder to his two young U.S. citizen daughters, he and his family must also live in fear of the reentry charge he is facing from your office and the trial that begins April 19th. We request again that in light of the death of Moises, you exercise your prosecutorial discretion to drop the charge and let Mr. Aguirre and his family grieve in peace. We also request more generally that in light of the widespread violence in the Northern Triangle (El Salvador, Guatemala, and Honduras), your office refrain from prosecuting for entry and reentry those fleeing violence and death in those countries. Moises is a tragic example of the real consequences of deterrence of refugees through prosecution.

Mr. Aguirre is an influential leader of the immigrant rights and labor movements, and he is a pillar within the community. He was the worker center coordinator for the VOZ Workers’ Rights Education Project in Portland, which is a worker-led organization that empowers immigrants and day laborers to gain control over their working conditions through leadership development, organizing, and community education. Through his work as an organizer, he has helped workers collect $500,000 in stolen wages, has helped improve health and safety labor standards, and organized neighborhood clean-ups. He is a passionate advocate for people’s rights and is a musician who sings for social justice causes. Francisco is also a trailblazer of the national movement advocating for the rights of day laborers and has worked closely with the National Day Laborer Organizing Network (NDLON).

The prosecution of Mr. Aguirre would constitute a grave injustice for him, his family, and the community. We request that you dismiss the charges immediately.

List of Organizations Who’ve Signed on to support Francisco Aguirre